Tsukuba, Japan—Studies have shown that being in a hot environment reduces cognitive performance, whereas a brief walk enhances cognition. But what happens when you go for a brief walk on a hot summer’s day, as so many students and office workers do during lunch or an afternoon break? Turns out, you might be better off avoiding the heat.

In a study published this month in Building and Environment, researchers from the University of Tsukuba discovered that just 15 minutes of walking outside on a hot day impaired cognitive performance, and this was most striking in men who don’t get enough sleep.

Those who work or study in urban heat islands, such as large cities in Japan, generally have the convenience of air-conditioning indoors over the summer months, which largely counters the negative impact of heat on learning and productivity. However, brief exposure to hot environments during commuting or breaks is inevitable, and whether such exposure affects cognition has not been known. “Previous experiments have used specialized climate chambers to test these effects. However, outdoor thermal environment differs significantly from indoor thermal environments in terms of radiation and wind,” says senior author Professor Hiroyuki Kusaka. “Radiation and wind have significant effects on thermal perception. Therefore, in order to assess the effects of outdoor heat stress on cognitive performance, experiments should be conducted in real outdoor environments.”

Researchers simulated a real-world scenario during the Japanese summer in which workers or students leave an air-conditioned indoor environment to walk or have a break in a hot outdoor urban environment. Ninety-six students completed a simple arithmetic test in an air-conditioned room before either staying indoors, walking outside, or resting outside for 15 minutes. They then returned indoors to complete a second arithmetic test, and any changes in performance were measured. Walking in a hot outdoor environment impaired cognitive performance; however, it was not simply the exposure to the hot environment that impaired cognition. Rather, it was the combination of walking and being outside in the summer heat that had impacted cognitive performance. Furthermore, this effect was more pronounced in people, specifically men, who were sleep deprived, having slept less than 5 hours.

“Japanese office workers and students, especially men, need to be aware of this situation as they work and study,” says Kusaka. The team hopes that their findings will help guide ways to improve productivity and learning in workers and students in Japan, and perhaps even further afield as the impact of climate change moves to the forefront.

The article, “Effect of walking in heat-stressful outdoor environments in an urban setting on cognitive performance indoors,” was published in Building and Environment at DOI: 10.1016/j.buildenv.2022.108893 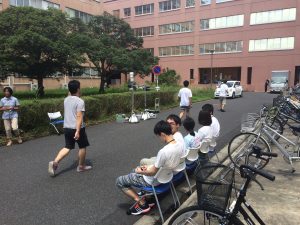