Develop Computational Sciences with the Full Performance of the Machine

Supported by the dramatic growth of computer power, the computational sciences have seen remarkable developments in recent years, and are now recognized – along with theory, experiment, and observation – as indispensable partners in the promotion of the cutting-edge scientific frontiers of the 21st century.

Nowadays, computers characterized by a new architecture are appearing in rapid succession and include large-scale systems equipped with Graphics Processing Units (GPUs) as accelerators, massively-parallel computers equipped with many-core processors, which may play a central role in future large-scale computing, to say nothing of ordinary massively-parallel computers combining a multitude of CPUs. Due to advances of such diverse computers, it becomes a difficult task for researchers to make computations with the full power of each machine.

By means of close collaborations among researchers of physics and those of computer sciences, the Center for Computational Sciences (CCS) has successfully achieved a number of breakthroughs by developing optimum computers for computational sciences in the fields of particle physics and astrophysics. Furthermore, the Center now has a Project Office for Exascale Computational Sciences dedicated to close collaborations among computational and computer scientists in a wide variety of fields, and to establishing cooperation among researchers belonging to divergent scientific fields.

The services of this Office are not restricted to the Center alone, but extend outside to promote nationwide collaborations. To date, it has conducted analyses and examinations of hot spots for major applications to ensure that they show high efficiency in the Highly Accelerated Parallel Advanced system for Computational Sciences (HA-PACS), which is a massively-parallel supercomputer equipped with GPU accelerators, and in Oakforest-PACS in Joint Center for Advanced High Performance Computing (JCAHPC), the fastest supercomputer in Japan equipped with processors of Many Integrated Core architecture, under close cooperation with the Project Office for Exascale Computing System Development, which is the organization promoting the development of new computers. Currently, developments and adjustments of computer codes that run efficiently at Cygnus, equipped with both GPU and feld-programmable gate array (FPGA), have been a central issue at the Office. 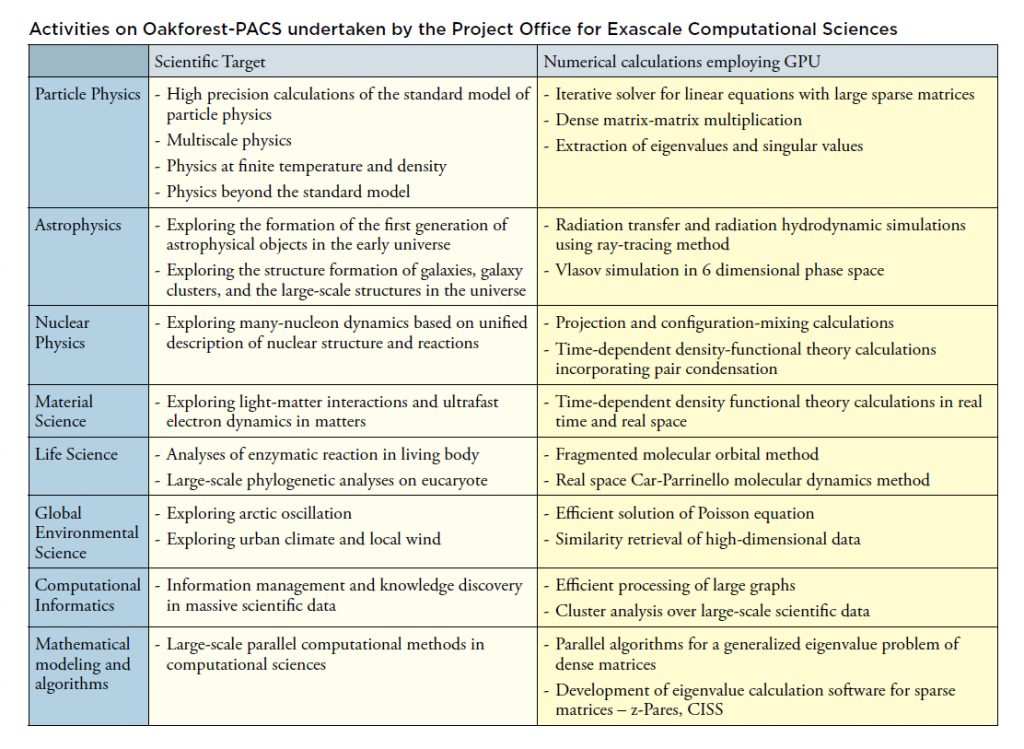