There are four fundamental forces in nature: gravity, the electromagnetic force, the weak force, and the strong force. Of these, the strong force is the energy source of twinkling stars in the sky, and makes up the nuclei in the atoms that constitute the myriad molecules forming all the matter. The strong force acts on the quarks, which are the smallest constitutive particles of matter (the elementary particle), and causes a characteristic phenomenon called “confinement” due to the non-perturbative effect: Experimentally observed is the bound state of multiple quarks called the hadron and quarks cannot yet be observed individually. Thus, some kind of non-perturbative method is necessary to investigate the strong force. The purpose of lattice quantum chromodynamics (QCD) is to define the QCD theory on the four-dimensional lattice, which consists of the discretized three-dimensional space and one-dimensional time, and then to study quantitatively, by first-principle calculations on a supercomputer, the realm of 10−15 m where the strong force reigns.

Since the physical point simulations with the physical quark masses have been made possible thanks to algorithmic improvements and increasing computational resources in recent years, lattice QCD simulations are now in the stage of precision measurements at 1% error levels. This is a significant improvement from the previous 10% error stage. In the latest studies, the results for the hadron masses obtained by our lattice QCD simulation had almost reproduced the experimental values (Fig. 1). In addition, extremely large scale simulations allow us a detailed investigation of the internal structure of hadrons. For example, Fig. 2 shows our lattice QCD results for the proton electric form factor (□, ◯) in comparison with the experimental one (red curve). Both results show a good agreement. 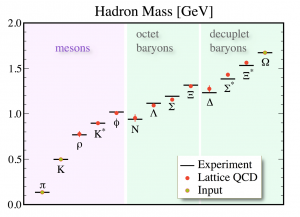 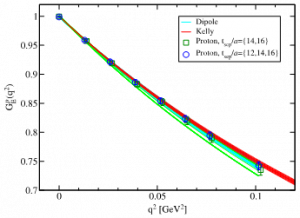