To achieve Exa-Scale(which is beyond Peta-Scale),  it is necessary to
– establish fault tolerant technology in case of more than 100,000 nodes.
– accomplish 10TFlops performance in a single node.

Accelerators enable to improve performance, and reduce the simulation time per step (strong-scaling).

Project Office for Exascale Computing System Development has been developing a scale of one Peta-Flops system, with Tightly Coupled Accelerators and HA-PACS, to perform demonstration for the Exa-Flops system. 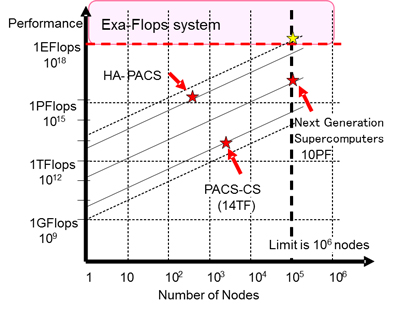 GPGPU(GPU) is originally used for graphics processing, and now used as a mechanism for accelerating scientific and technical computing. In recent years, due to the rapid advances in semiconductor and mounting many computing units, performance has improved significantly.

HA-PACS Project is considering GPU and GRAPE-DR(developed by National Astronomical Observatory of Japan) as accelerators.

PEARL(PCI-Express Adaptive and Reliable Link), which enables direct communication among GPUs, enriches bandwidth and reduces the latency of communication.

PEARL with PEACH2(PCI- Express Adaptive Communication Hub 2) chip and board have been developing. PEACH2 is implemented on FPGA(Field Programmable Gate Array) for flexible programming on communication control.

PEARL can produce the following benefits.

Without PEARL, problems below will happen.

– CPU controls coupling and communication between GPU -> Dependent on CPU control, the efficiency loss (Example: Communication of GPU, while CPU is controlling I/O. )

– Communication between GPU and HDD is impossible without through CPU