Tsukuba, Japan – Current simulations of cosmic structure formation do not accurately reproduce the properties of ghost-like particles called neutrinos that have been present in the Universe since its beginning. But now, a research team from Japan has devised an approach that solves this problem.

In a study published this month in SC ’21: Proceedings of the International Conference for High Performance Computing, Networking, Storage and Analysis, researchers at the University of Tsukuba, Kyoto University, and the University of Tokyo report simulations that precisely follow the dynamics of such cosmic relic neutrinos. This study was selected as a finalist for the 2021 ACM Gordon Bell Prize, which recognizes outstanding achievement in high-performance computing.

Neutrinos are much lighter than all other known particles, but their exact mass remains a mystery. Measuring this mass could help scientists develop theories that go beyond the standard model of particle physics and test explanations for how the Universe evolved. One promising way to pin down this mass is to study the impact of cosmic relic neutrinos on large-scale structure formation using simulations and compare the results with observations. But these simulations need to be extremely accurate.

“Standard simulations use techniques known as particle-based N-body methods, which have two main drawbacks when it comes to massive neutrinos,” explains Dr. Naoki Yoshida, Principal Investigator at the Kavli Institute for the Physics and Mathematics of the Universe, the University of Tokyo. “First, the simulation results are susceptible to random fluctuations called shot noise. And second, these particle-based methods cannot accurately reproduce collisionless damping—a key process in which fast-moving neutrinos suppress the growth of structure in the Universe.”

To avoid these issues, the researchers followed the dynamics of the massive neutrinos by directly solving a central equation in plasma physics known as the Vlasov equation. Unlike previous studies, they solved this equation in full six-dimensional phase space, which means that all six dimensions associated with space and velocity were considered. The team coupled this Vlasov simulation with a particle-based N-body simulation of cold dark matter—the main component of matter in the Universe. They performed their hybrid simulations on the supercomputer Fugaku at the RIKEN Center for Computational Science.

“Our largest simulation self-consistently combines the Vlasov simulation on 400 trillion grids with 330 billion-body calculations, and it accurately reproduces the complex dynamics of cosmic neutrinos,” says lead author of the study, Professor Koji Yoshikawa. “Moreover, the time-to-solution for our simulation is substantially shorter than that for the largest N-body simulations, and the performance scales extremely well with up to 147,456 nodes (7 million CPU cores) on Fugaku.”

In addition to helping determine the neutrino mass, the researchers suggest that their scheme could be used to study, for example, phenomena involving electrostatic and magnetized plasma and self-gravitating systems.

The article, “A 400 trillion-grid Vlasov Simulation on Fugaku Supercomputer: Large-scale Distribution of Cosmic Relic Neutrinos in a Six-dimensional Phase Space,” was published in SC ’21: Proceedings of the International Conference for High Performance Computing, Networking, Storage and Analysis at DOI: 10.1145/3458817.3487401

This research is supported by MEXT as “Priority Issue on postK computer” (Elucidation of the Fundamental Laws and Evolution of the Universe) and “Program for Promoting Researches on the Supercomputer Fugaku” (Toward a unified view of the universe: from large scale structures to planets). This research is also supported by the JSPS KAKENHI Grant Number JP18H04336 and JP21H01079, by JST CREST JPMJCR1414 and by JST AIP Acceleration Research Grant JP20317829. Our code has been developed partially on ATERUI supercomputer at Center for Computational Astrophysics (CfCA), National Astronomical Observatory of Japan in its early stage. This research also used computational resources of the Oakforest–PACS through the HPCI System Research Project (project ID: hp170123 and hp190093) and Multidisciplinary Cooperative Research Program in Center for Computational Sciences, University of Tsukuba (project ID: 17a40 and xg18i019). 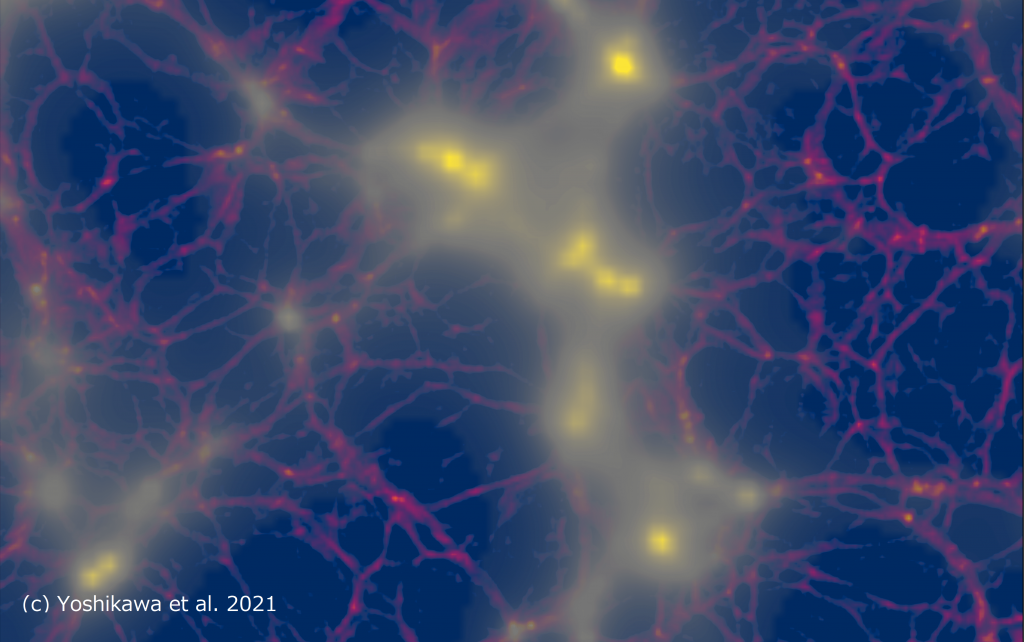