Tokyo and Tsukuba, Japan, November 18, 2011 – A research group from RIKEN, the University of Tsukuba, the University of Tokyo, and Fujitsu Limited today announced that research results obtained using the “K computer” were awarded the ACM Gordon Bell Prize (*1), Peak-Performance at SC11, the International Conference for High Performance Computing, Networking, Storage and Analysis taking place in Seattle, on November 17 (US Pacific Standard Time).

The award-winning results, presented at SC11, revealed the electron states of silicon nanowires, which have attracted attention as a core material for next-generation semiconductors. To verify the computational performance of the K computer, quantum-mechanical computations were performed on the electron states of a nanowire with approximately 100,000 atoms (20 nanometers in diameter and 6 nanometers long), close to the actual size of the materials, and achieved execution performance (*2) of 3.08 petaflops (representing execution efficiency of 43.6%). The results of the detailed calculations on the electron states of silicon nanowires, comprised of 10,000 to 40,000 atoms, clarified that electron transport characteristics will change depending on the cross-sectional shape of the nanowire.

The award marked the first time that a research group from Japan won the Gordon Bell Prize for Peak-Performance since 2004, when a team led by Professor Akira Kageyama, currently based at Kobe University, won the prize for performing a simulation of a geomagnetic dynamo using the first-generation Earth Simulator installed at the Japan Agency for Marine-Earth Science and Technology (JAMSTEC).

The application used in this current research is one of the core applications developed as part of the “Grand Challenges” program (which, in the field of nanotechnology, is led by the Institute for Molecular Science at Japan’s National Institute of Natural Sciences) of the Ministry of Education, Culture, Sports, Science and Technology (MEXT).

As a part of the High-Performance Computing Infrastructure (HPCI) initiative led by MEXT, both RIKEN and Fujitsu have been working together to develop the K computer and high-speed communications software (MPI library) for use on the K computer, with the aim of beginning shared use by November 2012.

Since the start of the “Development of a Next-Generation Supercomputer” project (now renamed HPCI Initiative”) in 2006, RIKEN, the University of Tsukuba, and the University of Tokyo have been working to develop optimal calculation methods and programs to verify the performance of the K computer using real applications. Researchers of computational science, whose aim is to elucidate natural phenomena using computer simulations, and researchers of computer science, whose aim is to drive technological advances in the application of supercomputers, have been working together to efficiently develop massively parallel code (*3) or RSDFT (*4) based on density functional theory by discretizeing it in real space, which is used to compute the energy states and electron states of matter. In the current research, the K computer was used to compute the electron states of silicon nanowires (Figure 1), ultrafine traces made of silicon atoms that have potential for use as a next-generation semiconductor material that generates rapid switching speeds and low current leakage.

In results computed using approximately two-thirds of the K computer system’s capacity, execution performance of 3.08 petaflops was achieved. The research team succeeded in calculating the electron state of a silicon nanowire measuring 10 nm in diameter and 10 nm in length comprised of 39,696 atoms. These results were presented at the SC11 being held November 12–18 in Seattle, USA. The findings won the ACM Gordon Bell Prize for Peak-Performance in a genuine application program.

The Gordon Bell Prize was established in 1987 by noted American computer scientist Gordon Bell to promote the development of parallel computing technology, and it is administered by the Association for Computing Machinery (*5). Every year, the prize is awarded to the group that has applied parallel computing to practical scientific problems and produced outstanding results.

From among five finalist papers that had passed the first round of selections, the judges for this year’s Gordon Bell Prize selected the paper “First-principles calculations of electron states of a silicon nanowire with 100,000 atoms on the K computer” for the Peak-Performance Prize. The Peak-Performance Prize is given for research that shows high real-world performance in a practical application, and underscores both the practical value of this research and the K computer’s practical effectiveness.

The silicon nanowires that are the subject of this research, which serve as electron channels in next-generation field-effect transistors (*6), comprise 10,000 to 100,000 silicon atoms and measure 10–20 nm in diameter and roughly 10 nm in length. These results represent the world’s first attempt at calculating the electron state, using quantum theory, for a 107,292-atom nanowire measuring 20 nm in diameter and 6 nm in length. Execution performance of 3.08 petaflops was achieved (representing execution efficiency of 43.6%), showing that high-precision simulations are possible at the nanoscale level that will be used in future devices. This work also examined the electron states of nanowires comprising 10,000 to 40,000 atoms, and measuring approximately 10 nm, but in different cross-sectional shapes (round, oblong, and dumbbell-shaped), and found that electron-transport characteristics were highly dependent on the nanoscale shape, showing that computational material sciences using the K computer can contribute greatly to nanoscale design decisions.

As the real applications running on the K computer received a very high evaluation, the research group was awarded the Gordon Bell Prize for Peak-Performance. This is significant in that it shows the international high performance computing (HPC) community has recognized the K computer’s potential to advance science and technology. While continuing to gain a deeper understanding of silicon nanowires, researchers will also use these research experiences to raise the level of sophistication of other applications so that the K computer can bring results faster to a wider range of scientific fields.

“First-principles calculations of electron states of a silicon nanowire with 100,000 atoms on the K computer”

The ACM Gordon Bell Prize, sponsored by the Association of Computing Machinery, is awarded to promote advancements in parallel computing technology, and is presented every November at the International Conference for High Performance Computing, Networking, Storage and Analysis (SC, Supercomputing Conference) to the papers that show the most outstanding results in hardware and applications development.

In contrast to theoretical performance, this is the computational performance obtained in running a given program, and acts as a practical measure of a computer’s performance.

An application program that can run efficiently on a massively parallel computer.

Real-Space Density Functional Theory. A simulation technique using the density functional theory that is based on first principles of quantum mechanics and then capable of treating complex condensed matters, and exploiting advantages of the real-space scheme. y al RSDFT is a density-functional computer code based on the discretization of the Kohn-Sham equation in real-space. Compared to the previous method by expanding the equation by plane wave functions, the real-space method does not require the Fast Fourier Transformation (FFT) in part of its core calculations, making it advantageously amenable to parallelization.

A noted academic association for computer science headquartered in New York, founded in 1947.

A type of electronic device that has an amplification effect, characterized by low power requirements. The complementary metal-oxide semiconductor (CMOS) circuits widely used in computers today are combinations of a type of FET called MOSFET (metal-oxide semiconductor field-effect transistor). Applying voltage perpendicular to the surface of the semiconductor is used to control electrical transmission through a field effect. 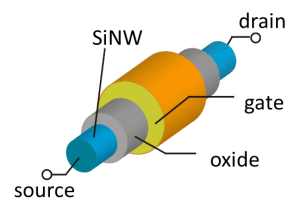 Voltage is applied to the gate (yellow) which controls the flow of current (electrons) between the source and drain (blue) via the oxide (grey).

Figure 2: Relationship between number of transmitted electron states and energy in silicon nanowires

Varying the cross-sectional shape and side smoothness of silicon nanowires affected the number of transmitted electron states, which carry energy, shown on the horizontal axis.

RIKEN is Japan’s flagship research institute devoted to basic and applied research. Over 2500 papers by RIKEN researchers are published every year in reputable scientific and technical journals, covering topics ranging across a broad spectrum of disciplines including physics, chemistry, biology, medical science and engineering. RIKEN’s advanced research environment and strong emphasis on interdisciplinary collaboration has earned itself an unparalleled reputation for scientific excellence in Japan and around the world. For more information, please see: http://www.riken.jp/

About University of Tsukuba

The University of Tsukuba aims to establish free exchange and close relationship in both basic and applied sciences with educational and research organizations and academic communities in Japan and overseas. The university makes a contribution to the world through its educational system that seeks to make the most of students’ creativity and individuality.
http://www.tsukuba.ac.jp/english/
https://www.ccs.tsukuba.ac.jp/eng/

About The University of Tokyo

The University of Tokyo, also known as “Todai” was established in 1877 as the first national university in Japan. As a leading research university, Todai offers courses in essentially all academic disciplines at both undergraduate and graduate levels and conducts research across the full spectrum of academic activity. The university aims to provide its students with a rich and varied academic environment that ensures opportunities for both intellectual development and the acquisition of professional knowledge and skills.

All other company or product names mentioned herein are trademarks or registered trademarks of their respective owners. Information provided in this press release is accurate at time of publication and is subject to change without advance notice.